Apple may launch a foldable iPad in 2024 — analyst 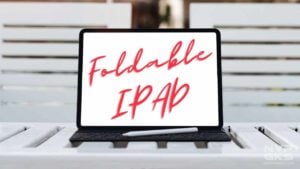 For several years now, Apple has been rumored to enter the foldable market. However, there’s still no concrete news about it yet. But before they launch a foldable iPhone, it seems like a foldable iPad will be the first one to go.

If you’re wondering why Apple might want to launch its foldable iPad, it’s probably because they don’t want to risk any issues on their main product. They think it’d be better to get their feet wet by launching a foldable iPad first instead of heading straight to the iPhone.

Head of Research at CCS Insight, Ben Wood, told CNBC that he thinks Apple won’t release a foldable phone because it doesn’t make any sense. He added that he expects them to instead release an iPad with a folding screen first.

Wood also expects the pricing to be around $2,500, which is even more expensive than Samsung’s Galaxy Z Fold 4. While the market has gained popularity over the years, it’s still not convincing enough for the iPhone.

Recent reports say Apple is currently in talks with LG about the foldable display, but there’s still no confirmation as of the moment.

There’s no official announcement regarding the foldable iPad yet, so take all this information as rumors for now.

This article, Apple may launch a foldable iPad in 2024 — analyst, was originally published at NoypiGeeks | Philippines Technology News, Reviews and How to’s.