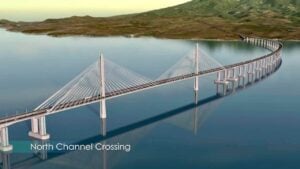 The highly-anticipated Bataan-Cavite Interlink Bridge is close to becoming real.

It is said that the Department of Public Works and Highways (DPWH) is now hard at work completing the detailed engineering and design of the Bataan-Cavite Interlink Bridge project.

Currently, the department is conducting geophysical surveys and geotechnical investigations over Manila Bay to evaluate the underground conditions — a process that is now 55% complete.

The said inter-island bridge will be 32 kilometers long and will connect Central Luzon and the Southern Tagalog Region.

Meanwhile, the feasibility studies have already been completed during the previous administration.

The bridge will have four lanes and, when completed, will significantly cut the travel time between Cavite and Bataan to 20-30 minutes from 5 hours.

SEE ALSO: How to get driver’s license in the Philippines

It will also have two cable-stayed navigation bridges for Corregidor Island. The project, which will have North Channel and South Channel bridges, will span 400 meters and 900 meters, respectively.

In Cavite, the bridge will align in the area of Barangay Timalan Balsahan, Naic, while in Bataan, it will be around Barangas Alas-Asin and Barangay Mountain View in Mariveles.