Byahe to acquire over 500 modern jeepneys 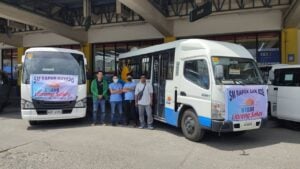 Manny Pangilinan-backed company Byahe, an operator of modern jeepneys, announced that they will be acquiring more than 500 units for Php1.5 billion.

It is said that the fleet of modern jeeps will be used in at least 35 routes across the country and will hit the roads by 2027. CEO Laurence Bahia of Byahe that they plan to achieve the 500 modern jeepney target in 2027 by acquiring 100 units every year.

Of the total number, 40 percent of them will be electric-powered vehicles. As per the company, they want to lure in investors who are betting on sustainable initiatives.

Bahia added that these modern jeepneys will be mostly deployed in Central Luzon and Metro Manila. A few of them will then hit the roads of metro Davao and Cebu.

As of writing, Byahe’s modern jeepneys are present around Metro Manila. One of its most popular routes travels from Cubao to Divisoria and vice versa.

With the acquisition of new jeepneys, Byahe will be able to create new jobs by hiring additional drivers. They will receive a minimum wage with a chance to also earn overtime pay.

SEE ALSO: LTO violations, fines, and penalties in the Philippines

As per the company, they approve four to five hours of daily overtime, which would allow drivers to have a net take-home pay of around Php24,000.

This article, Byahe to acquire over 500 modern jeepneys, was originally published at NoypiGeeks | Philippines Technology News, Reviews and How to’s.