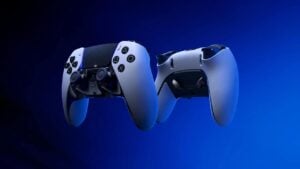 Sony has introduced a new controller for its current game console. Check out the new Sony DualSense Edge, and it’s currently the most customizable, Sony-official PlayStation controller yet.

One of the key highlights of the new Sony DualSense Edge is the two new buttons on the back, which are easily accessible by your pinky and ring fingers, giving you more control options.

The said back buttons, which are called LB and RB (for the left and right, obviously), can also be swapped between lever-style or half-done designs.

Compared to the first PS5 DualSense Controller, the Edge gains two new Function buttons at the bottom, a reinforced USB port for better durability, and improved trigger buttons and joysticks.

What’s more, the joysticks now have changeable caps. You can pick between standard, low dome, or high dome, depending on your thumb’s preference.

In fact, even the entire joystick mobile is replaceable, so you don’t have to dispose of the entire controller when it gets damaged. The Edge also allows users to adjust the stick sensitivity and dead zones.

Another noticeable differences are the touchpad, which now features tiny PlayStation icons that provides texture. The ABXY and D-pad buttons are now painted in black.

All the other features we come to love from the first PS5 controller are still here. It still has adaptive drivers, haptic feedback, motion control, and more.

The price of the new Sony DualSense Edge controller for the PlayStation 5 is yet to be announced, so stay tuned for that. What we do know is that the package will come with a set of back buttons, a set of stick caps, and a new braided USB Type-C cable with a locking mechanism.

This article, Customizable Sony DualSense Edge controller with back buttons announced, was originally published at NoypiGeeks | Philippines Technology News, Reviews and How to’s.