HONOR Pad 8 lands in the Philippines 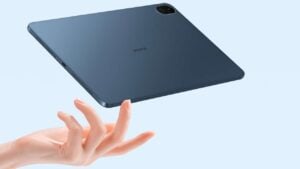 Under the hood, it comes with a Qualcomm Snapdragon 680 octa-core processor, paired with up to 6GB of RAM and 128GB of expandable storage.

As for the battery, it has a 7,250mAh capacity that should be enough to last you for an entire day of light to moderate use.

It has a 5-megapixel camera in the front for selfies and video calls, and a similar 5-megapixel sensor on the back for casual snaps.

No 4G LTE cellular version, but it does whip with dual-band WiFi and Bluetooth 5.1. A USB Type-C port is there for both data transfers and charging, while the software is handled by the Android 12-based Magic UI 6.1.

The HONOR Pad 8 has an SRP of Php17,990 in the Philippines. That’s with 6GB of RAM, 128GB of storage, and will only be available in Dawnlight Blue colorway. It comes with a free Honor Magic Keyboard case that’s worth Php5,990 so you can use it like a laptop.

This article, HONOR Pad 8 lands in the Philippines, was originally published at NoypiGeeks | Philippines Technology News, Reviews and How to’s.