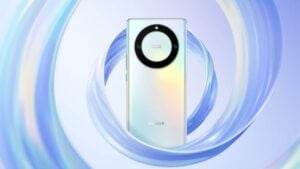 Honor’s latest midrange smartphone, the Honor X40, has been introduced in China featuring a few flagship-level specs and an elegant and chic design.

The Honor X40 is powered by a Qualcomm Snapdragon 695. Not the most powerful chip around, but should suffice for a midrange device. It even has 5G connectivity to make it futureproof.

If not for the processor, you’d mistake the X40 as a flagship device. Why? For starters, it has a fancy 6.67-inch FHD+ AMOLED, which has a speedy 120Hz refresh rate, responsive 300Hz touch sampling rate, 800-nits high brightness mode, under-screen fingerprint scanner, and is even curved for a more premium look and feel.

A small punch-hole on top of the screen allows the 8-megapixel selfie camera to peek through.

On the back, we have the Huawei Mate-like ring that holds the sharp 50-megapixel main camera, 2-megapixel depth sensor, and the LED flash on top.

It has a 5,000mAh battery, which is marginally bigger than the usual 5,000mAh that a lot of devices have. A 40W faster charger is included to juice it up.