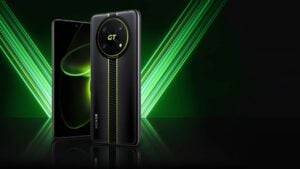 HONOR just launched a new feature-packed high-end phone in China. It may not be a proper flagship, but it’s one of the most powerful devices the company offers.

The new HONOR X40 GT boasts a Qualcomm Snapdragon 888 processor. It’s not the latest and most powerful to date but is still one of the best chipsets you can get right now. What’s more, you can pair it with either 8GB or 12GB of RAM and 256GB of storage.

HONOR attached the chip to an 8-layer graphite cooling pad to ensure it stays cool.

On the front, we have a fast 144Hz display with a large size of 6.81-inches with an FHD+ pixel resolution. Albeit, it’s an IPS panel and not a colorful AMOLED screen.

On the back, we have a familiar design similar to the Magic 4 Pro. A circular glass holds the ultra-sharp 50-megapixel main camera, joined by two 2-megapixel sensors. Sadly, no ultra-wide. A 16-megapixel shooter sits on the front for selfies.

The battery has a 4,800mAh capacity, which can be fully charged in about an hour via the 66W adapter. Software is handled by the Android 12-based Magic UI 6.1 interface.