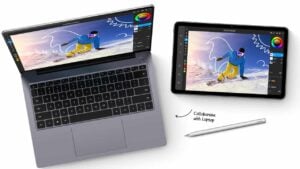 Thinking of getting the Huawei MatePad 10.4 but you’re a little short on cash? Don’t fret, as the company has released a cheaper WiFi-only version for you.

The new Huawei MatePad 10.4 WiFi is essentially the same as the LTE version that came out in May. The lack of cellular connectivity resulted in a pretty huge price cut as this one only costs Php14,999, while the former was Php18,999.

You can pre-order the device from August 15 to September 4, where you can also get the Huawei Smart Keyboard at a discounted price of Php2,599 (from Php6,999).

The device will also come with a free Huawei FreeBuds 4i and smart lamp with a total value of Php6,098.

For a quick recap, the MatePad 10.4 boasts an enormous 10.4-inch FHD IPS display, Kirin 710A processor, four speakers, and a 7,250mAh non-removable battery with 18W fast charging. The rest of the specs are listed below.