iPhone’s Dynamic Island arrives on Android via an app 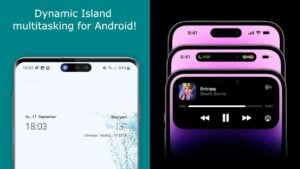 Sure, the new iPhone 14 Pro models are more powerful, has better cameras, and have overall improved hardware. But, we all know the thing that people are really talking about: Dynamic Island. This new interface trick immediately became a hit that app developers worked hard to bring to Android.

For those who are not familiar, the iPhone 14 Pro and Pro Max have a redesigned notch that looks much cleaner. But that’s not it, as Apple also introduced Dynamic Island, which seamlessly hides the notch to display important information, app shortcuts, and tons of other tricks.

Previously, an MIUI theme developer said that they were able to port a similar feature to Xiaomi devices. Now, an app called dynamicSpot by developer Jawomo will bring it to more devices.

The app works like Dynamic Island. It surrounds the punch-hole or notch of your screen when receiving notifications. It is shown working on a Galaxy S22-like device, where the punch-hole is in the middle, but you can set up the floating bar to pop out on the side or wherever the notch is.

Being Android, it offers tons of customization options as it lets you adjust the type of notifications you want to see, the size of the island, the ability two show two pop-up notifications at once, and more.

There’s even a Pro version that costs USD4.99 (around Php300) that unlocks other features like the ability to show the pop-up on lock screen. If you’re interested, you can get the free version here.

This article, iPhone’s Dynamic Island arrives on Android via an app, was originally published at NoypiGeeks | Philippines Technology News, Reviews and How to’s.