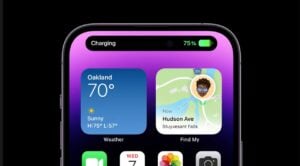 Dynamic Island, possibly the biggest feature of the new iPhone 14 Pro models, has been copied for Android.

If you haven’t heard, the new iPhone 14 Pro and 14 Pro Max have a redesigned notch. Along with it, Apple has introduced a new UI feature called Dynamic Island, which essentially camouflages the pill-shaped notch to show things like notifications, timers, music, and a whole lot more.

Just like other iOS features, we won’t be surprised if a similar feature makes it to Android. And apparently, it already happened — unofficially, at least.

Someone managed to put a Dynamic Island-like notification feature on a Xiaomi MIUI device. It apparently works using a theme called Grumpy UI, but only in the Chinese language for now.

As you can see in the short video demo above, the method managed to hide the punch-hole on the top left of the screen.

The developers of the theme said that the update is still under review. Once approved, it will be available to Xiaomi users via the MIUI Themes store.

This article, iPhone’s Dynamic Island copied on Android, was originally published at NoypiGeeks | Philippines Technology News, Reviews and How to’s.