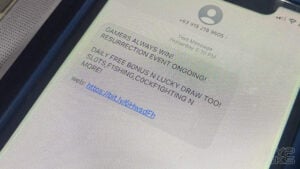 This new order was made after the current surge in scams and spam sent via SMS text messages.

In the memorandum, which was sent to telcos last September 12, 2022, the NTC is ordering Globe Telecom, Smart Communications, and DITO Telecommunity to “block or deactivate domains or Uniform Resource Locators (URLs), TinyURLs, Smart Links and/or QR Codes emanating from malicious sites” based on the current database that came from government agencies.

Such agencies are the NTC themselves, as well as the National Privacy Commission (NPC), the Department of Trade and Industry (DTI), and law enforcement agencies.

Also included are the reports from subscribers and those that were generated using machine learning and artificial intelligence.

The memorandum is also directing the said telcos to submit a report of compliance to the Office of the Commissioner until September 16.

Newcomer DITO Telecommunity said that they support the NTC in their initiatives to protect the public from “phishing, smishing, quishing, and other forms of illegal activities.”

Both Globe and Smart then highlighted their longstanding efforts to fight scams and spam SMS messages.