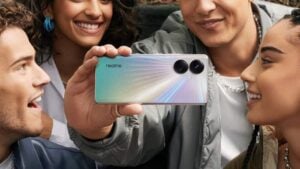 The Realme 10 series continue to grow with the addition of Pro models. Here we have the new Realme 10 Pro and 10 Pro Plus carrying a couple of higher-end specs for those who want something more.

Let’s first talk about the more interesting model of the two, the Realme 10 Pro plus, which is powered by a MediaTek Dimensity 1080 octa-core processor.

It also has a packed display sporting a 6.7-inch AMOLED panel, with an FHD+ resolution, 120Hz refresh rate, 360Hz touch sampling, 10-bit color, and 100% DCI-P3 coverage. What’s more, it is slightly curved on the sides for a more premium appeal and ergonomics.

The Plus model has the standard 5,000mAh battery but boasts 67W fast charging support.

On the back, Realme retains a familiar design we’ve seen on a lot of devices today. There are two individual lenses that hold the sharp 108-megapixel main camera, an 8-megapixel ultra-wide, and a 2-megapixel macro lens. A punch-hole on the front holds the 16-megapixel selfie camera.

Another big feature is the latest Android 13 operating system with Realme UI 4.0 on top.

To set it apart, the screen is flat, uses a less impressive LCD panel, and has a lower 240Hz touch sensitivity. It also has slower 33W charging, no ultra-wide, and is only powered by a Qualcomm Snapdragon 695 processor.