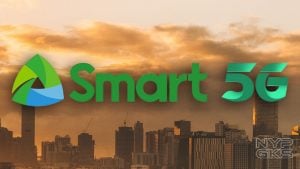 Smart Communications happily announced that they put up 2,500 new 5G base stations across the country.

The addition of 2,500 new Smart 5G stations will improve the 5G connectivity and speed experience of the growing number of 5G users across the country.

As per Smart, majority of these new 5G base stations have been deployed just in the first half of this year.

The list also includes Tarlac City; Silang, Cavite; Cabuyao, Lumban and Santa Rosa, Laguna; Iloilo City and Dumangas, Iloilo; the cities of Bacolod and Sagay in Negros Occidental; the cities of Cebu, Lapu-Lapu, and Mandaue in Cebu; Baybay, Ormoc and Palo in Leyte; The cities of Pagadian and Zamboanga in Zamboanga del Sur; Cagayan de Oro City; Butuan City in Agusan del Norte; and the cities of Digos and Davao in Davao del Sur.

By the end of June 2022, Smart claims that they were able to roll out a total of around 77,100 5G base stations across the Philippines. Not just 5G, but it also supports the brand’s 3G and 4G LTE users.

So much so that Smart is saying that its 3G, 4G LTE, and 5G already cover 97% of the population.

This article, Smart has 2,500 new 5G base stations, was originally published at NoypiGeeks | Philippines Technology News, Reviews and How to’s.