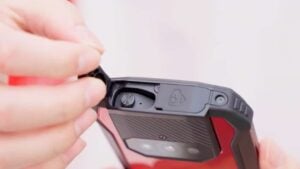 Looking for a rugged smartphone that comes with built-in TWS earbuds? You do you and check out the new Ulefone Armor 15.

The idea of the Ulefone Armor 15 is quite practical. There’s a pair of TWS earbuds that you can pull out from the top, which makes two devices easier to carry, especially for those who always need a pair of cans for entertainment or hands-free calls.

These TWS earphones automatically pair to your devices via Bluetooth 5.0. It also works on other devices.

Oh, and of course, this one is a rugged device just like its cousins. It is IP68/69K rated and has MIL-STD-810G certification for being, water, dust, and drop resistant.

Made for the outdoorsy, the Armor 15 has a 6,600mAh battery that provides power for both the device and the earphones. The buds can provide 5 hours of music at a time with a total of 505 hours with the phone’s large battery.

It also has stereo speakers, 16-megapixel front camera, and 12-megapixel and 13-megapixel rear cameras. NFC is also onboard.

You can back the Ulefone Armor 15 through Kickstarter.